12 Sep 2019:  After 13 years of hosting the Military Appreciation Ride, Sue and I have decided to retire this great event.

It is with heavy hearts we acknowledge and announce the administrative time and physical demands required to ensure the Military Ride remains a first-class event is simply more than one couple can handle. Ironically, the incredible popularity and success of the Military Ride has resulted in an Event that has grown too big for us to manage/run.

Conversely, we want to celebrate and extend a big and hearty THANK YOU to all of our Sponsors. The only reason we were able to have a Military Ride was because of the annual generosity of individuals, Snowmobile Clubs, County Snowmobile Alliances, Snowmobile Dealers, and Veteran’s Groups.

Special thanks to Major Dick Decker (Ret.), SMSgt Dave Dahlke (Ret.), Ken’s Sports, Track Side, the Derby Track, Best Western Derby Inn, Northernaire Resort, Oneida and Sauk County Snowmobile Alliances, and the AWSC. From our modest beginning in 2007 to the end, you folks were always there for us. Thank you.

In closing, Sue and I are humbled to have had the privilege of introducing organized snowmobiling to hundreds of Veterans. For many of the Veterans/family members, the Military Appreciation Ride was their first time on a snowmobile, as they would have never been exposed to snowmobiling without the Military Ride. We're very proud to report the Military Ride grew at least one new family of snowmobilers each year it was held.

Reflecting today, the Military Ride educated over a thousand new and current snowmobilers about Wisconsin’s Snowmobile Program. All the Veterans who rode in our Military Ride were amazed, humbled, and appreciated learning how thousands of volunteers from over 600 Wisconsin Snowmobile Clubs work together to create the biggest and best connected trail network in the nation.

See you on the trail!

Please patronize our 1,200+ commercial sponsors. For a listing by county, please click here.

Looking to join a snowmobile club? We have  a complete list of clubs by county. Simply click on the county. 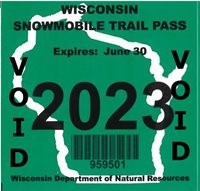 Annually, all snowmobiles operating in WI are required to display a current Wisconsin Trail Pass.